In the automotive world, crossover vehicles are all the rage, so why can't it be so in the tube mixer world?

The Mark 3 tube mixer is very different to the original EZTubeMixer but they do share some core technology, particularly the the basic 3 triode gain block used throughout the designs and the use of standard Eurocard sized PCBs and a 32 way connector to the backplane PCB. The main differences are in implementation:

As you can see in the picture above, there is just about enough room on the new TLA board for a couple of small OEP input transformers but if they are fitted there is no room for front panel controls. You will also notice the two large electrolytic capacitors lying on their side near the bottom of the PCB. These are in series with the gain setting resistor. They are 100uF 250V electrolytics. At the time this board was built I could not find a radial lead version that was short enough (there is about 25mm of height available) so I was forced to lay them on their sides. I have since sourced a version  that is 25mm high which has freed up a little more PCB space

The most recent mixer I built was for a customer who wanted to use large rotary faders so it made sense to use 70mm wide EZTubeMixer style modules. However, as this was a custom design, which meant new Eurocard PCB and front panel layouts would be required, it made sense to decouple front panel design from the main Eurocard PCB design - which is exactly what the Mark 3 aims to do.

So this mixer became a combination of EZTubeMixer and Mark 3 - in other words a crossover mixer.

It has a new 6U Eurocard PCB which includes the active electronics for the mic pre and EQ gain make up (essentially the EZTubeMixer TLA cut and pasted). The tubes are mounted horizontally just as in the EZTubeMixer design. However, the 32 way connector has been changed to conform to the Mark 3 pin out. The PCB also holds the input transformer (Jensen) and the output transformer (Electro Mag). This PCB also holds the LC components of the EQ.

The front panel is built using the Mark 3 method with all the controls mounted on a separate PCB that is mounted onto the front panel. The EQ is a version of the REDD EQ modified to have three selectable frequencies on all three bands.

The picture above shows a completed channel module. The front panel and its PCB is on the left. The three tubes and the input transformer are at the top. The 32 way connector  is top right. Just below centre right is the newElectro Mag output transformer. Below the middle left are the EQ components

You can see the three stand offs on the right hand side; two on the 32 way connector and one at the bottom right hand corner of the PCB. These, together with the three small blocks you can see on the front panel, are used to mount the 1mm thick galvanised steel screen. Together these form a light weight surprisingly strong module with good screening.

The front panel layout is conventional. The top section is the mic pre with gain switch plus toggles for mic/line, phantom, phase, 20dB pad and HPF. Beleow that is the 3 band REDDPLUS EQ with three selectable frequencies per band and lastly right at the bottom is the pan control. As you can see there is pleny of space on the 70mm wide front panel. 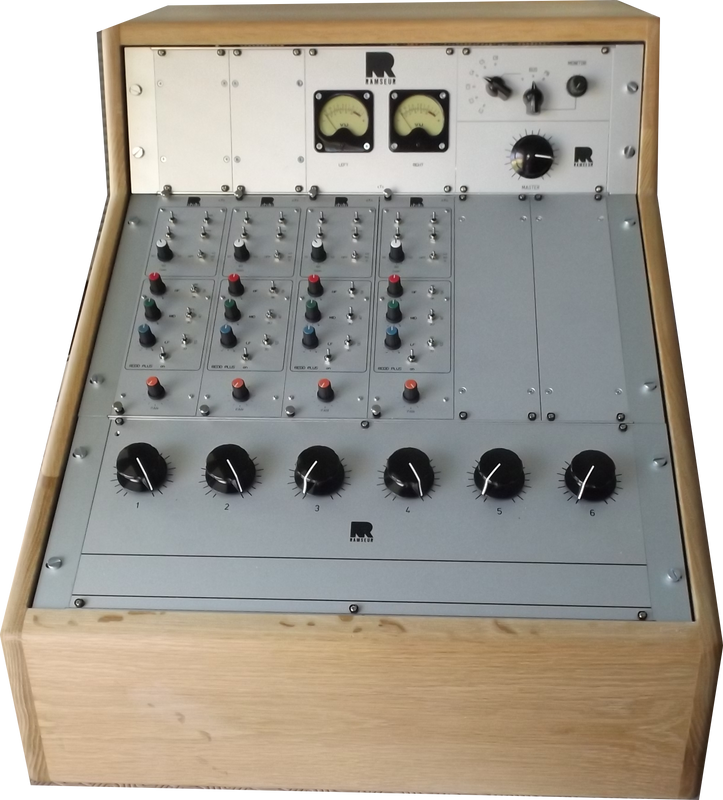 The build of this mixer, although very much in the style of the EZTubeMixer, has allowed me to prove many aspects of the Mark 3 design.
Posted by ruffrecords at 14:39 No comments:

After testing a range of 2:1 ratio output transformers for the new 35mm wide modules of the Mark 3 mixer, it became apparent that there is no off the shelf transformer with the required performance that fits in the module. The only transformer with a satisfactory performance is the Carnhill VTB 2291 which is far too big but will now be the standard by which all others are judged.

After some discussion on groupDIY, CJ came up with a design that appeared to meet the parameters of the specification, in particular the requirement not to saturate at 20Hz when outputting +22dBm into a 600 ohm load. As no off the shelf solution seemed to exist I looked for a local transformer manufacturer who was prepared to wind a custom transformer for me. The nearest I found is Electro Mag Ltd based just outside Kings Lynne in Norfolk.

I passed CJ’s design to them, and after some further discussion they made a prototype based on a modified bobbin and an EI245 core. The results of testing this transformer are shown below.

The primary inductance was measured as 32H at 100Hz

The primary leakage inductance was measured as 5.95mH at 1KHz

The secondary inductance was measured as 8H at 100Hz

The secondary leakage inductance was measured as 1,35mH at 1KHz

The primary dc resistance was measured as 178 ohms

The secondary dc resistance was measured as 90 ohms

Distortion was initially measured at +16dBm into a 600 ohm load from 1KHz down to 10Hz. The driving source was a standard Twin Line Amp (6922 based SRPP stage with overall negative feedback). Output impedance is approximately 150 ohms. The results are shown in the table below alongside the VTB2291 results for comparison.

Distortion was then measured at +22dBm into a 600 ohm load from 1KHz down to 20Hz. The results are shown in the table below alongside the VTB2291 results for comparison.


20Hz Distortion versus Level
Lastly, the effect of output level on 20Hz distortion of the Electro Mag transformer into a 600 ohm load was also measured. The results are shown in the table below.

Frequency Response
Next, the frequency response from 20Hz to 40KHz  at +4dBu into 600 ohms was measured using a Lindos MS10 test set. The results are shown in the table below.

Initial test results indicate that this transformer basically meets the specification. Its performance exceeds that of all of the other small transformers tested particularly at low frequencies. It also compares favourably with the Carnhill VTB2291 which is several times its size. In particular:

The only downside is this transformer is still not quite small enough to fit inside a 35mm Mark 3 module. Initially it was thought that with some minor modifications to the mechanics it could be made to fit but this turned out not to be practical. Nevertheless, this transformer has been used in other tube projects with considerable success.

So the search continued. I spent some time looking at some of the first Neve 35mm modules and soon realised they had encountered the same problem back in the 1970s. The earliest Neve 35mm modules did not contain an output transformer; it was mounted externally. Only later did they use an internal one and it was quite large but rather flat.

Then by chance, work in a non-related area identified possible UI laminations and bobbins that could realise a low profile transformer only 25mm high and which would also provide a lot more winding space than the earlier EI transformer. It too was rather large and flat so it looked like I was moving in the right direction. I know very little about transformer design but as the saying goes, I know a man who does. Some UI transformer components were obtained by Electro Mag, who built the original EI transformer, and some were sent to my friend Volker who had kindly agreed to build some prototype transformers.

Detailed tests of the first Volker prototype and a production prototype have now been carried out and the results are as follows:

Distortion of Volker’s prototype was measured at various frequencies at a level of +20dBu into a 600 ohm load. A Lindos MS20 was used as the reference signal source and REW was used to analyse the resulting output spectrum. The amplifier used is a standard Twin Line Amp design operated at 340V HT for reduced distortion. The amplifier distortion is predominantly 2nd harmonic and the transformer distortion is predominantly third harmonic. Both of these along with the total harmonic distortion were measured at each frequency. The results are shown in the table below:

The second harmonic distortion remains low, increasing from 0.025% at 1000Hz to 0.049% at 10Hz. This is entirely due to the amplifier. The increase at low frequencies is almost certainly due to reduced open loop gain. The third harmonic distortion rises steadily as frequency decreases and is almost entirely due to the transformer. It is a very creditable 0.21% at 20Hz and equals that of the Carnhill VTB2291.

All other harmonics were at least 20dB lower than the second and third harmonics.

To establish maximum usable levels, further tests were undertaken at 20Hz, increasing the level in 1dB increments from 21dBu to 26dBu into a 600 ohm load. The results are shown in the table below:


Even at these levels, the THD never exceeds 1% at 20Hz. In all cases the major distortion component is the third harmonic due to the transformer. This performance is better than the Carnhill VTB2291.

In October 2019, a production prototype was received from Electro Mag, built to Volker’s design. The primary distortion tests were repeated for this transformer. The original test rig is no longer available so the tests were undertaken at +20dBu into 600 ohms using an HT voltage of 250V. The results are shown below:

This transformer meets all the design requirements. It comfortably fits in the space available and always meets or exceeds the performance of the Carnhill VTB2291. The next step is to incorporate it into the 35mm channel amp modules of the Mark 3 tube mixer.